We made it!!  I have always wanted to visit NYC and finally we did it.  Last month now since its now officially October 1.  I have neglected my new blog but this seems like a good place to start.

It takes a long time to get there from here.  Lubbock to Dallas for a 3 hour layover, then a 3 hour flight to La Guardia airport.  I have to admit I was terrified that I’d get lost.  I was meeting my niece who was coming in from Phoenix on another airline but it turns out it was amazingly easy to find her & our cab to our hotel.  The cab driver says they are building a new airport across the street so I’m sure if I ever go again, it will be way more complicated.

First night in, we checked in and off we went…to the subway!!  We walked about 4 blocks from our hotel and took the train to Times Square.  It was flashy and crowded and altogether pretty cool,  We had our only icky meal at a diner there.  $20 sandwiches.  Pretty gross.  But we walked & looked and probably photobombed half the tourists on the street as they took selfies.  And spoke in 200 languages we did not understand.

On Tuesday, we had rain.  Lots and lots of rain.  But we got to see the tour the Empire State Building and Radio City Music Hall before we completely drowned.  We had bought a City Pass (a really good deal) so we got into these expensive tours for free, relatively speaking.  Basically, we were not forking over any cash on the spot.  We got to Empire State pretty early so the line was relatively short.  They moved us along pretty quickly and everyone was very friendly.  There were armed soldiers in flack jackets carrying machine guns and that bothered me but I guess it’s the world we lived in.  The very top is 102 floors but the observation deck is on 85.  We did not pay extra to go up to 102.  Cannot imagine we would have seen more.  The view is breathtaking.  That is kind of an over the top word but in this case it fits.

Radio City Music Hall was next.  What a beautiful place.  We had a very enthusiastic and knowledgeable tour guide who walked us up and down 5 stories of stairs and we all lived to tell the tale.  The lobby was beautiful, the hall itself is so majestic.  I know it’s been restored but they did a great job and it was easy to imagine movie premieres back in the 30’s & 40’s and women in evening gowns and men in tuxes.  We got to see the gears that make the stage work and the lights and a little mini stage that does everything the big stage does.  We saw practice rooms and a private apartment the original owner had that was vintage.  There is an autograph book there with signatures of everyone from Mariah Carey to Richard Nixon to Walter Pigeon (I think I noticed him because he wrote big).  So much history.  And we met the Rockette of the day whose job it is to pose for pictures that can be purchased at the end of the tour.  Very enjoyable tour.  Oh, and you have to be 5’6″ to be a Rockette so neither my niece or I qualified.  We would have made great Rockettes. 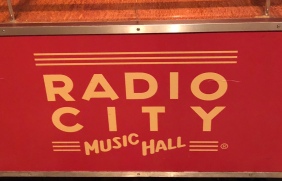 Also on Tuesday, I saw my very first Broadway show! 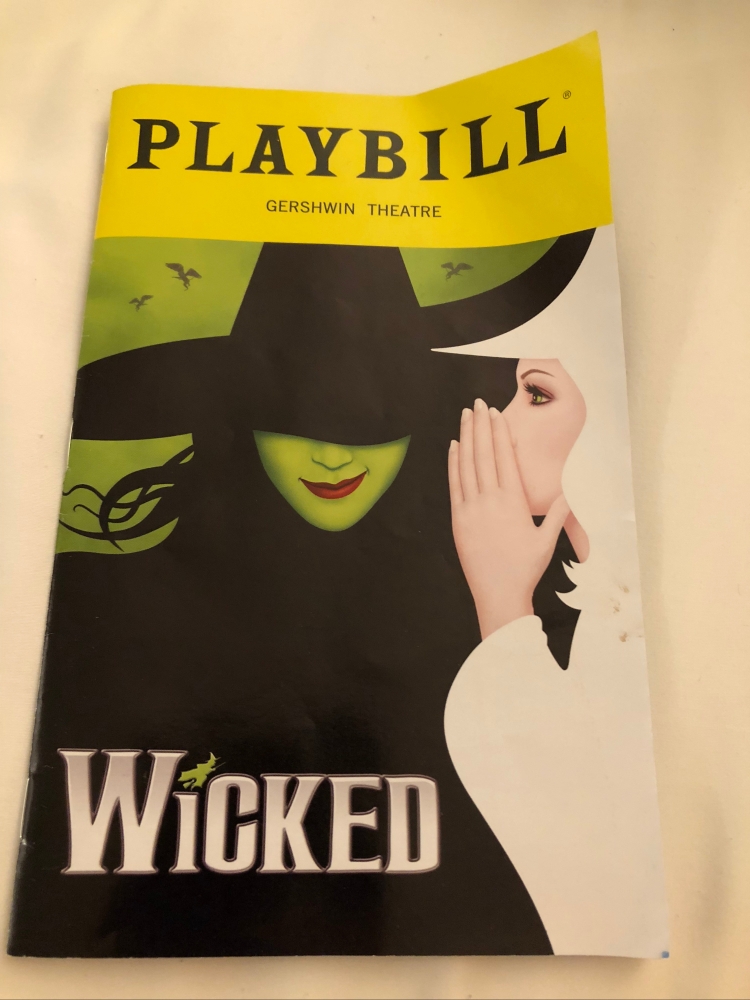 Wednesday was Central Park day.  We did a walking tour that showed TV and Movie locations.  Basically, this tour guide/actress told us what movie was shot in which part of the park.  Beautiful day and we had a nice walk.  It is really a beautiful place, full of happy people and kids.  The coolest part for me was Strawberry Fields, the part of the park that is dedicated to John Lennon.  Our guide told us the City did not think John Lennon was worthy of the space but that Yoko gave them $1 million reasons why it was a good idea.  And people from 128 countries wrote letters supporting John Lennon. Before the donation, the space had been earmarked for a dedication to Bing Crosby.   The site is across the street from the Dakota Apartments where Yoko still lives & she can look out over the site.  I know it was their home but it would be eerie to me to go in the gate he was murdered at. 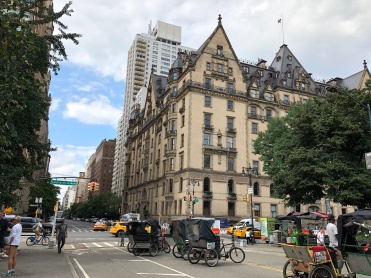 Also, we went to the 911 Memorial.  I took few pictures.  Everyone was very respectful.  Very eerie.  Lady on plane going up said she & husband had been up there and her husband’s ex-wife’s husband had died on 9-11.  She said they went to find his name on the wall around one of the 2 fountains.  They were discussing how to find his name and looked down and there it was.  She said it was chilling.  I can imagine. 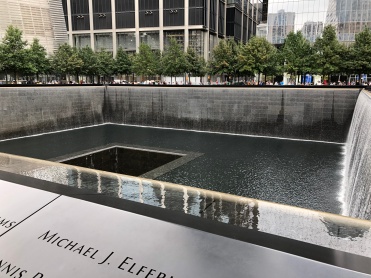 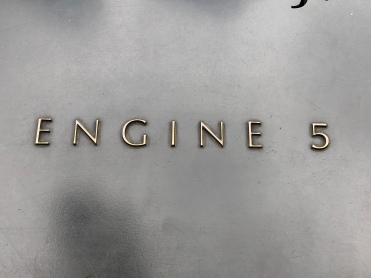 Thursday was Statue of Liberty, Ellis Island, Brooklyn & water taxi day.  And my second Broadway play.  And I can almost guarantee that the Mormon Church is not impressed.  And Cameron Diaz was sitting 2 rows behind me. 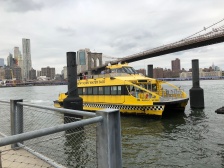 Friday was Atlantic City day.  A couple of hours on a Greyhound, a few hours of losing money, a look at the Boardwalk and back on the bus. 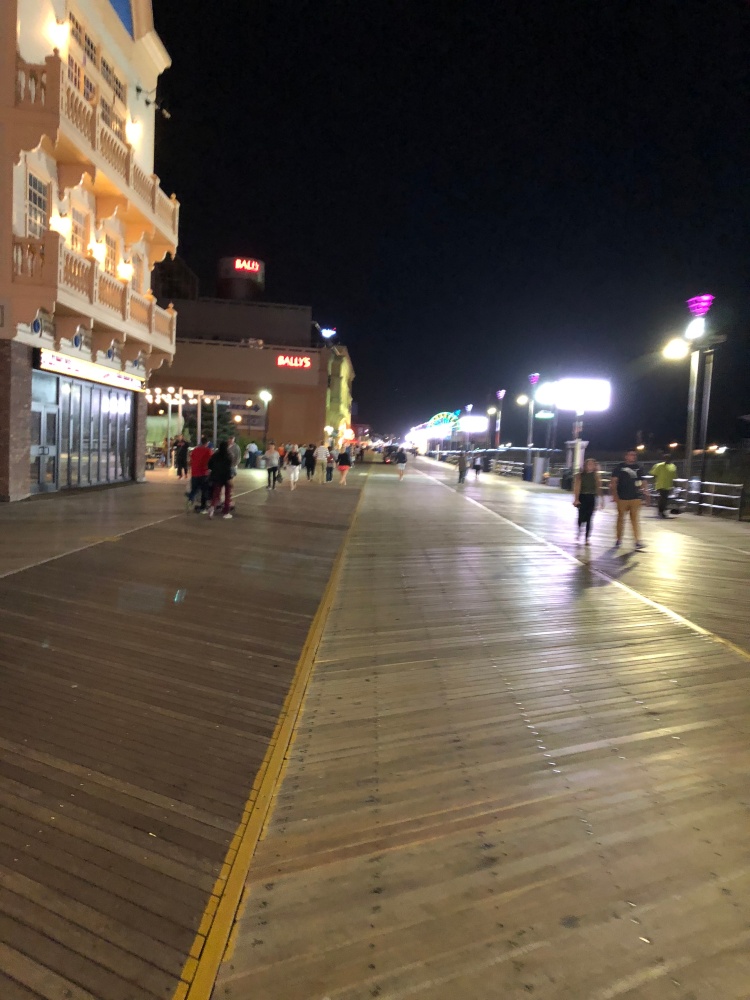 On Saturday, we were pretty much done, both in terms of sights we wanted to see and mentally.  We walked 5th Avenue & had a nice breakfast and dinner.  Sunday was another long travel day.   It was a great trip but I was glad to head back to less people and my little home.  I was excited to share this with my beautiful niece.

Now I can’t remember what day but we also ate at Ellen’s Stardust Diner.  Food was ok but the wait staff sings all day.  All are wanting to be on Broadway & the manager said that every Broadway show has someone in it that used to work there. I have a friend who works with stage people and he says that some nights after the shows the performers go to Ellen’s and perform.  We did not see anyone famous there.  I probably would not have noticed them if they were there.