I have a big box full stuff from my childhood & going through it yesterday I wonder why we save so much stuff.  It’s been in the box for 40 years.  And other than an occasional trip down memory lane it has no purpose.

My Barbie & Ken are in there.  I got them for Christmas in 1964.  They both came in their bathing suits & Mom had made each of them a wardrobe.  I don’t have any original mom-made clothes anymore.  I think I gave them to my niece for her Barbie.  And Barbie does not have her original head.  She came with a red ponytail and Barbie pin curls in the front.  I took her ponytail down to give her long hair but there was not enough hair and she had bald spots.  Then it would not go back up.  So somehow, somewhere she ended up with short brown hair.  Ken is original and has painted on hair.  I do have the pattern that Barbie wardrobe was made from.  This is my barbie, from a stock photo.  I remembered her hair being darker red. 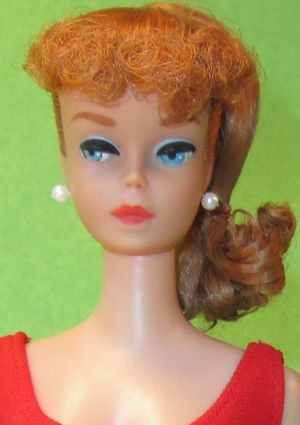 My two baby dolls were in the box too.  One was Connie, in a homemade by my mom dress.  She was my first baby.  Her feet have dog chew marks from being left outside.  And I don’t remember the other baby’s name.  I’m a bad mom.

And some stuffed animals.  The brown dog my sister Cathy gave me when I had chicken pox.  And a red & white dog my Daddy gave me for Valentines one day.  And a striped tiger my Daddy gave me from the hospital gift shop when I had a hysterectomy at age 31.   And a teddy bear wearing an ‘I Love Las Vegas’ t shirt from my first trip to Vegas.

There is a Native American penny bank bought from a Native American trading post on the old Route 66 when I was a little girl.  They were called & called themselves Indians back then. She is very un-Pc now.  We traveled the road several times between Arizona & Texas and we’d always begged to stop at the trading posts.  My dad would always say we had to keep moving.  As a child, this may have been the only time we ever stopped at the trading posts.  There are less of them now but some are still there and I always stop at at least one.

And the coolest gift I ever got.  My first radio, all my own, for my 12th birthday in 1969.  It’s AM only has been dropped and for some odd reason I remember orange cake batter landing on it when I was making a cake.  It lasted me through lots of baths and dish washing.  Dang, I loved that radio.  I saw one of these “antiques” on a TV show recently.

I’m a minimalist.  I don’t see the value of a lot of stuff.  Don’t get me wrong, I live in a home with furniture and pictures on the wall but no expensive decorations.  I have some angels but I don’t consider it a collection.  I used to have a collection of bears but gave them away over the years.  As a single person, I worry about my poor nephew cleaning out the crap in my house and rarely buy or even own a thing without thinking about that.  Plus I’ve discovered that the person with most stuff just has the most stuff.  It doesn’t make them happier. But these few things meant something to me, even if I don’t look at them everyday.  And they’ll not mean a thing to Steve.  I guess there is comfort that he can throw them all away with emotion.  I called it a big box but it’s really a small amount of stuff.  Marked as important, for me anyway.