City Homicide is an Australian police drama that ran from 2007-2011 & I found it a couple of months ago to stream from Prime (3 seasons) & Hulu (last 2 seasons).  It follows a squad of …surprise…homicide detectives…as they solve crimes every week.  I really liked the originals…Matt, Duncan, Jen & Simon.  And the administration guys…Sgt Wolfe, Superintendent Jarvis & Commander Waverly.   As an aside, I like that fact that Brit (and Aussie) TV have women in police administrative roles without explanation or drama as to how they got there.  American writers could learn a thing or 2.

Later on, Simon left.  We saw him leave but he was never mentioned again which bothered me.   And sadly, we got Allie.  Possibly the most annoying character ever on my TV and as a NYPD Blue fan, she’s even more annoying than Diane Russell, the character I always hated more than the rest.  Allie was big mouthed, rude to everyone & argumentative to admin to the point of insubordination but never took any flack for it. She almost ruined the show for me but I hung in to the end.  They also added Nick, who had a past history with Jen (rekindled)  & Rhys, the Commander’s nephew.

The cases were pretty routine & fun to watch and solved in 45 minutes.  As we ran down towards the end, the best thing I was holding out for was Jen & Nick, who had separated on season 4 because 2 detectives on same squad could not be involved. I wold have been horribly disappointed if they had not gotten back together before the end.  I was not horribly disappointed.  And there you have it.  After all the murder cases and personal drama (but pretty minimal for a show on this long), it all comes down to rooting for love in the end.   And I’m happy.   And sad it’s over.  Like finishing a good book. 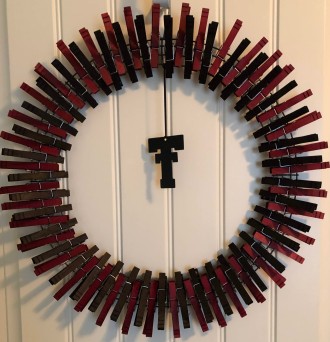 Here is my new Texas Tech Wreath.  I found a pattern on Pinterest, bought and dyed clothes pins, added my friend Aaron’s Double T and viola!!

This is the first time I’ve ever made a wreath.  I try to be creative but I’m not great at it.  I crochet scarves to donate. I used to cross stitch before my eyes left the building.  But I really like the way this turned out.

My very creative friend Jan said it needed another element & we discussed a couple of things to add.  And they would have looked great.  But I liked what I’d done.  I liked the simplicity of it.  And decided to leave it as is.  Because I’d done it all by myself.

First football game is August 31 and it’ll be proudly on my door.

One day last week, I picked some tomatoes off my vine and had them in my car when I passed my friend Amy’s office.  I hadn’t seen her in awhile so I took 2 tomatoes & put the on her desk.  She wasn’t there but I told her husband I’d left them.  A couple of days ago I called Amy to make sure she’d gotten the tomatoes. She ‘meant’ to call me…but said she knew immediately when she saw them who they were from.  And so now I’m wondering…what did that mean?

I’m kind of old fashioned, no doubt.  I think it’s growing up with little and having more now but not as much as many.  I consider fresh fruits & veggies a great gift.  And homemade gifts.  And someone bringing me a coke because they were stopping to get one for themselves. Actually, because I’m not really a stuff person, those things impress me even more.

So was sweet Amy, who has a whole lot of money, happy with my gift or just shaking her head and thinking I’m pathetic?