It’s finally fall & in west Texas, the first part of fall means South Plains Fair time.  Years ago the fair had country concerts most of the week.  We paid something like $10 and saw George Strait or Alan Jackson or Ricky Van Shelton.  But that fizzled out.  Now the radio stations sponsor shows & the concert is free after paying to get into the fair.  The concerts are not necessarily the same.  One station was doing up & coming country although that seems to have stopped.   The oldie station does the fogies–this year is The Cowsills, a band that I never heard.  Last year was Gary Puckett & the Union Gap.  I’ve also seen Air Supply, Gary Lewis & the Playboys and Herman’s Hermits, to name a few.

The concert is held in the Fairpark Coliseum, a big old barn thing with inadequate air conditioning so it’s always pretty warm in there.  I’d bet the heating is same & it’d be pretty cold too.  But nothing has changed in the 40 years I’ve been going to shows there so it’s all good.

First all 3 came out & all sang big hits…Aaron Tippen sang ‘You’ve Got To Stand for Something’, Sammy Kershaw sang ‘Cadillac Style’ & Collin Raye sang ‘That’s my Story’.  Then they each did a set and met again at the end to sing together again.

The voices are weaker.  The bodies showed a little middle age.  But they put on an enthusiastic show & everyone had a good time.   My favorite was Collin Raye’s ‘Love,Me’, his signature song.  Everyone got their phones out & did the old lighter thing with their phone flashlights.  Even Aaron came out with his phone from the back of the stage.  Aaron is a little weird.  Probably one of those off the wall kids who turned in to a very hyperactive adult. 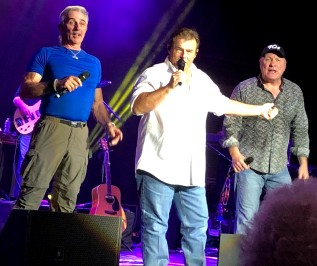 Did I mention Aaron is weird?

1 lb Ground Beef
2 Potatoes, cut into bite size pieces
1 onion, chopped
1 can Rotel Tomatoes.  I use mild because I’m a wimp.
House Seasoning to taste
3 cups boiling water
Ketchup.   Not part of recipe but I love it.

Brown the meat with the onion & house seasoning. Drain. Add tomatoes & potatoes.  Pour boiling water in and cook until potatoes are tender.  Eat as is or add ketchup which I love in this recipe.

One of my favorites!!  I’ll post a picture next time I make it.  It’s pretty too.